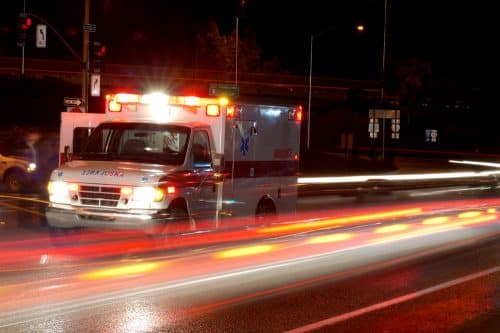 Two people were killed, and four others injured, in a DUI crash that temporarily closed the northbound 605 Freeway in Norwalk early Monday morning.

NORWALK, California — Two people were killed, and four others injured, in a DUI crash that temporarily closed the northbound 605 Freeway in Norwalk early Monday morning.

The identities of the two deceased were withheld pending notification of their next of kin, according to a California Highway Patrol news release.  They were described as a 52-year-old man and a 19-year-old woman both from Paramount who were inside a 1999 Ford Windstar.

A 31-year-old man from Norwalk, Alex Barragan, was arrested on suspicion of driving his car under the influence of alcohol, according to the CHP.

The crash occurred just after 1 a.m. when a car and a minivan collided on the northbound freeway near Rosecrans Avenue.

A man inside the minivan got out and was pulled away from the burning vehicle, but was later pronounced dead on the freeway, Stage said.

There were 2 other people from Paramount inside the minivan, including a 7-year-old girl, were hospitalized.

The girl sustained major injuries while 22-year-old Martina Beshara suffered moderate injuries, according to the CHP.

Barragan and Monica Madrid, 22, of Norwalk were inside the Infiniti that struck the minivan, authorities said.

All northbound lanes were closed at 1:14 a.m. but all lanes on the freeway were reopened at 6:14 a.m.

If you or anyone else has additional information about the incident, you are asked to get in touch with CHP Officer Salazar at the Santa Fe Springs Area CHP Office at 562-868-0503.