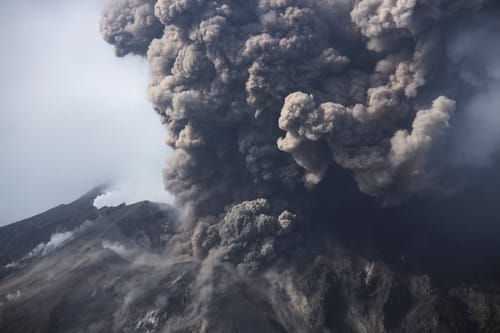 The danger zone is expanded around the erupting volcano on Monday, Say Indonesian officials. The volcano is hurling ash 9,800 feet into the atmosphere, and its explosions could be heard over seven miles away.

The lava is welling up in the crater as there are reflections of a reddish-yellow glow in the ash plumes, experts say. Early Monday the volcano’s alert has been raised to the highest level and expanded the danger zone to six miles. It said that a larger eruption is possible.

Spokesman Sutopo Purwo Nugroho told a news conference in Jakarta that the extension of the danger zone affects 22 villages and about 90,000 to 100,000 people. He said about 40,000 people have evacuated but others have not left because they feel safe or don’t want to abandon their livestock.

“Authorities will comb the area to persuade them,” he said. “If needed we will forcibly evacuate them.” About 25,000 people were already living in evacuation centers after an increase in tremors from the mountain in September sparked an evacuation.

Lava rising in the crater “will certainly spill over to the slopes,” Sutopo said.

The Indonesian disaster agency called on 100,000 to evacuate and expanded the danger zone after the eruption of Mount Agung.

Authorities raised the alert to the highest level on Monday following the increased activity over the weekend. The move to close the airport came after tests showed the volcano’s ash had reached its airspace, making it dangerous to fly.

The eruption closed Bali’s main airport. Hundreds of flights were canceled, leaving about 59,000 tourists stranded on the Island. The closure will continue until Tuesday, but officials said they are closely monitoring the situation and will determine every six hours whether the airport should remain closed.

“We now have to find a hotel and spend more of our money that they’re not going to cover us for when we get home, unfortunately,” said Canadian tourist Brandon Olsen.

Officials at the Disaster Mitigation Agency said in a statement Monday that a volcanic eruption is “imminent” though the exact scale remains unclear.

“Continuing plumes of smoke are occasionally accompanied by explosive eruptions and the sound of weak blasts that can be heard up to 12 km (seven miles) from the peak,” the statement read.

“Rays of fire are increasingly visible from night to the following day. This indicates the potential for a larger eruption is imminent,” it added.