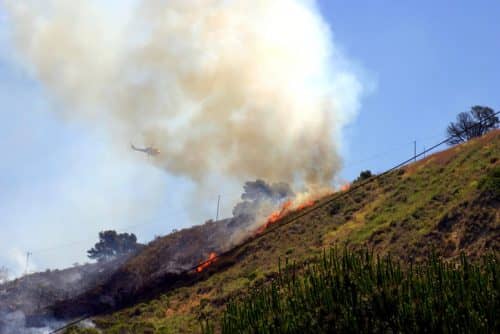 Red flag alerts being set in Southern California after a brush fire erupted and extinguished by the firefighters in Elysian Park ahead of a day of high fire danger.

LOS ANGELES, CA — Red flag alerts being set in Southern California after a brush fire erupted and extinguished by the firefighters in Elysian Park ahead of a day of high fire danger.

A call was reported at 11:30 PM Thursday to 1340 N. Stadium Way. According to Amy Bastman, the Los Angeles Fire Department, it burned down about an acre of vegetation.

Fortunately, there were no injuries reported. The cause of the fire is undefined and is under investigation.

There was already a red flag warning expecting a high risk of wildfires. It was in effect in Los Angeles and Orange counties on Friday – the cause of it was the strong winds and low humidity near Santa Ana.

The warning went into effect at around 3 AM Friday and was scheduled to expire at 10 PM. It was issued for the San Gabriel Mountains, the Santa Monica Mountain Recreational Area, the National forest and other forest and mountain areas around Ventura County.

In Los Angeles and Ventura counties, there is wind predicted to occur at 30 and 45 miles per hour and at the height of the wind amid humidity levels of 10 to 15% at lower elevations.

A humidity increase is predicted on Saturday and Sunday.

The temperature in the abovementioned areas will remain warm till Saturday.

In the next week, the weather is expected to get lower and bring cold winds.