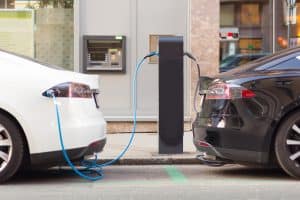 Everybody loves the electric car because it has a lot of benefits. Due to that a dramatic growth in electric cars could happen. According to National Grid the demand could jump by more than the capacity of the Hinkley Point C nuclear power station by 2030.

The number of electric cars and vans could go from 90,000 vehicles up to 9m by 2030. This means that the falling electricity demand would have a reverse trend. Furthermore the air will get cleaner and the streets will get quieter. Also you won’t see so many people waiting at petrol stations.

We should be aware of challenges that comes with the adoption of battery-powered vehicles. The electric cars could make a problem for the power grids. For examples, if everybody gets home around 5pm and 6pm the demand could get higher as much as 8GW, National Grid said. If we don’t find a solution by 2030 this will become a huge problem. Shifting the time of charging the cars will lower the demand by 3.5G.

Climate change can also have an impact on the peak of electricity demand. The UK forecast said it will get hotter and as the temperatures get warmer the use of electricity will reach new levels.

Let’s not forget about the Tesla Model 3, which will start its delivery at the end of July 2017.

“Electric vehicles are coming – how quickly is the question. We are expecting battery-powered car sales to take off in the mid-2020s.” said Roisin Quinn, head of strategy at National Grid.