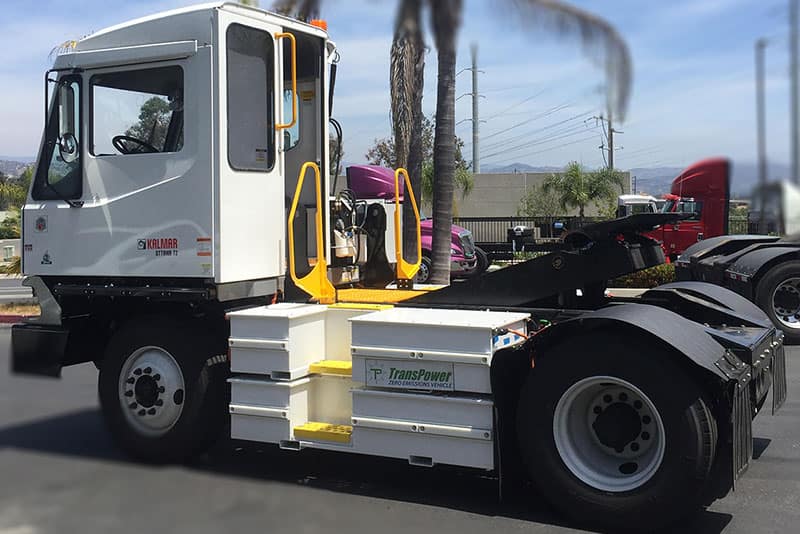 According to a panel discussion at the Advanced Clean Transportation Expo in Long Beach, Calif., on Thursday, the ranks of those electric vehicles are swelling.

TransPower, battery-electric technology company, built 12 batter-electric trucks on the Peterbilt 579 chassis, which will be demonstrated in 2018 and 2019.  The company presented its electric Kalmar T2 tractor this week and is sending it to work next week at Grimmway Farms in Bakersfield, Calif. And 8 more coming on board in 2017.

The eHighway project testing in Carsin, Calif.,  that the South Coast Air Quality Management District is working on with German engineering giant Siemens and several other partners.

Tesla Inc. chief executive Elon Musk, in a TED talk in late April, teased the company’s upcoming electric big rig, saying that the “spry,” single-speed vehicle will be able to “out-torque any diesel semi.” The truck will be debuting in September.

Daimler Trucks has already begin building a small batch of the vehicles , which can haul up to 26 tons. The full production will begin by 2020 if demand allows.

ACT panelist Michael Simon, TransPower’s chief executive,said that “The technology is real and the technology works”.

Andy Swanton, the Los Angeles-based vice president of truck sales for electric vehicle manufacturer BYD said, ” Norway, where battery electric vehicles have the largest market share out of any other country, saw a surge in from 2.5 percent in 2011 to more than a third of all sales in 2016″.

In China roughly 120.000 zero-emission battery-electric buses are running, making up more than 20 percent of the domestic market share. Swanton said, that it’s compared with some 10,000 similar buses.  He said, that vehicles that travel 50 to 200 miles in a single -duty cycle are the best candidates for electrification here.

For passenger cars, the purchase price before incentives is 85 percent higher on average for an electric vehicle, Swanton said. The differential ranges from 19 percent between a Mercedes Benz C Class and an electric B250e to a whopping 163 percent between Nissan’s Versa and its electric Leaf model.

For a 40-foot transit bus, that’s a jump from $450,000 for a diesel vehicle to $750,000 for an electric version. Electric trucks, meanwhile, cost two to three times more than conventional ones, Swanton said.

“There’s no panacea,” he said. “We have to ask what’s realistic, what can I do on my retrofit fleets today, because I’m not going to buy all-new electric tomorrow.

Abas Goodarzi, chief executive of US Hybrid Corp., suggested customizing electrification technology already in place for monorails and other applications, rather than starting development from scratch.

Reeser promoted an analytics system that can track driver style, vehicle health and other factors external to the technology itself that might affect how electrification performs. For a fleet with a few hundred buses, collecting and analyzing data manually could cost millions of dollars in lost fuel efficiency, he said.

If fleets had access to creative financing – such as partial leases – or dedicated utility rates for commercial vehicle charging, they might be more inclined to electrify their inventory, panelists said.

“A big piece of this is education from the manufacturers, who need to say that, yes, electricity is expensive, but we can prove how they’re more cost-effective in the long-term,” Swanton said. “And we need to be investing ahead of the curve to prove that this stuff works.”