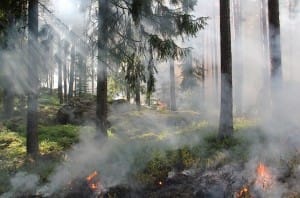 A part of the 2 Freeway in Glendale was shut down early this morning to allow crews to fight a brush fire that suddenly got going in the Eagle Rock vicinity.

EAGLE ROCK, CA – A part of the 2 Freeway in Glendale was shut down early this morning to allow crews to fight a brush fire that suddenly got going in the Eagle Rock vicinity. Already it had burned through 30 acres the previous day.

The brush fire, that erupted around 4 p.m. in the 2900 block of West Colorado Boulevard. It started close to the interchange of the 2 and 134 freeways. This caused a mandated evacuation of roughly 100 homes in Glendale. Fortunately, the Glendale Fire Department allowed the home-owners along East Glenoaks Boulevard from Mount Carmel Drive to Bywood Drive to go back to their homes around 10 p.m. on Sunday.

According to authorities, the fire disrupted traffic and issued a sizeable plume of smoke that was noticeable all across the Los Angeles area. In fact, the fire caused a lot of traffic jams in the area near the fire, especially including Colorado Boulevard. This was mainly because both the 134 and 2 freeways were temporarily not functioning.

It’s important to note that the north heading 2 Freeway and the 134 Freeway were still closed while firefighters continued to clean up the area. They also were staying vigilant for flare-ups. There have been no updates as to when these freeways will re-open.

The fire, ignited by hot temperatures and charred dry brush and palm trees just near the highway. It spread to 30 acres and was 25% contained late Sunday night. By then firefighters stopped forward momentum of the flames, according to the Los Angeles Fire Department.

There had been no news of any injuries or damage to structures. No actual cause of the fire has been cited.