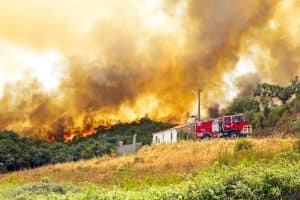 Mandatory evacuations were commanded near Calistoga in Sonoma County, located about 75 miles north of San Francisco.

The Sonoma County Sheriff’s Office said there were multiple fires reported around the county, including a “very big fire” that occurred on a freeway and spread into the east side of Santa Rosa.

Officials in Sonoma County said that all Santa Rosa City schools will be closed Monday.

On Sunday, multiple fires broke out the night as strong winds came to the area. Emergency lines were filled with callers reporting smoke in the area, prompting officials to ask that the public “only use 911 if they see actual unattended flames, or are having another emergency.”

“This fire is explosive,” he said, adding that hundreds, if not thousands of structures were endangered.

Cox said he heard of some people injured while trying to evacuate, but could not be specific.

Patients from Kaiser Permanente and Sutter Health hospitals on were evacuated early Monday from Santa Rosa and taken to other nearby hospitals or makeshift hospitals.

Officials were battling a 200-acre fire south of Lake Berryessa, in neighboring Napa County, located about 65 miles west of Sacramento.

Fire officials said the Atlas Fire broke out at around 9:50 p.m. local.

No immediate information on injuries or fatalities. Community centers, the Sonoma County Fairgrounds and other local centers have been opened for evacuees.

The National Weather Service reported a warning of threatening conditions that could lead to fast-spreading wildfires and it will go until early Tuesday.