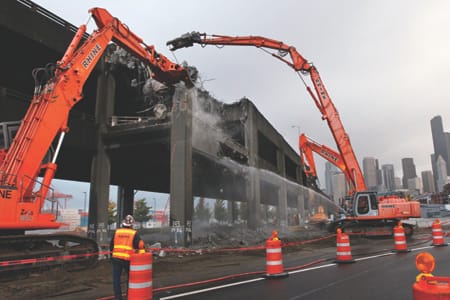 FILE -- Work continues on the demolition of the Alaskan Way Viaduct south of downtown in this Oct. 24, 2011, file photo, in Seattle. Seattle voters in August overwhelmingly endorsed a plan to build a tunnel replacement for the viaduct, finally ending a long-running argument over what to do about the state highway that runs through the downtown of the stateÕs biggest city. The story was among the top 10 Associated Press news stories for 2011, as voted on by editors in Washington. (AP Photo/Elaine Thompson, File)

In 2012 the Federal Infrastructure Permitting Dashboard was launched. It was created to track how infrastructure projects are reviewed and Federal permissions are processed. The new changes are made to increase the numbers of projects on the Dashboard.

In the new guidelines there are the criteria for identifying the infrastructure projects that will be the most influential for environment of communities or require a complicated permitting process. The Federal agencies that take part in permitting and funding infrastructure projects will post milestones and schedules for new identified projects within 90 days. The milestones will have information on the target of the project, the dates when the application has been received, the review and the comments, as well as the issuance of the final decision on the project.

Delays that happen because of the long process of approval of infrastructure projects are very expensive to the economy of the country. They can cost twice more than the fixing the infrastructure itself. Sometimes a project can wait for an approval for a decade or even longer. A delay for 6 years costs over 3,7 trillion dollars when about 1,7 trillion dollars is needed to renovate the infrastructure in the United States. With the new guidelines new projects can be approved in less than 2 years.

You are a Truck Driver and don’t Know What to do to Stay Awake Longer? Here are 10 Tips that will Surely Help you