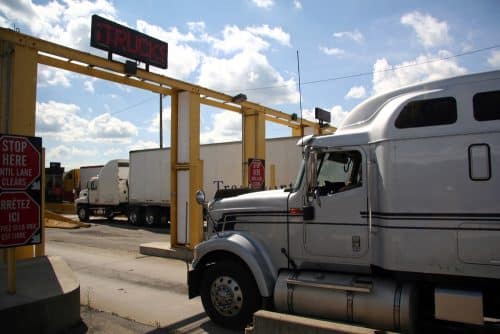 There is an increase in trucking costs for manufacturers and retailers, but for many shippers, the problem continues to worsen in booking big rigs point to more turmoil ahead.

Rates on the spot market, where companies book last-minute transportation, have come down from record highs hit last month amid a nationwide shortage of available trucks. Shippers have postponed deliveries that aren’t urgent or are moving more cargo by rail, reducing pressure on trucking fleets struggling to hire drivers.

But many shippers and trucking companies warn that, for many reasons, the pause may not last long. The strong economy is boosting freight demand. Produce distributors typically hire more trucks starting this month to move crops from Mexico and Southern states to grocery stores around the country. Full enforcement begins in April for a new federal safety rule that requires truckers to electronically log hours behind the wheel, potentially removing some big rigs from the road.

Last week, the average spot rate for the most common type of big rig was $2.17 per mile, down from $2.26 in January, though still up a third from a year ago, according to online freight marketplace DAT Solutions LLC. Capacity remains tight, with demand measuring at about seven loads per available truck for the week ending February 10, compared with 2.4 loads per truck during the same period in 2017, according to DAT.

On Thursday, wholesaler US Foods Holding Corp. USFD +1.25% said the shortage of available trucks hurt its fourth-quarter profits, and it will attempt to pass along those costs to its restaurant and food-service customers in the coming months. Last week, Tyson Foods Inc. TSN +0.43% said rising freight costs will help push meat prices higher at the supermarket.

Cereal-maker Kellogg K +0.53% Co.’s logistics costs rose at a double-digit rate in the fourth quarter, with percentage increases in the high single digits expected in 2018.

Tight capacity is giving trucking companies the upper hand in negotiations over long-term freight contracts. Contract rates are expected to rise as much as 10% in 2018. This week, Werner Enterprises Inc., WERN +1.45% a large Omaha-based trucking company, reset its guidance on rate increases at between 6% and 10%, up from 4% to 8%.

According to analysts, some of the increases will go toward raising drivers’ pay and recruiting new operators.

Some shippers are moving freight over to the rail, benefiting carriers that offer intermodal service to manage transportation on both road and rail. The number of truck trailers moved by rail in January rose 10% from the year before, according to the Association of American Railroads.

While shipping containers from the ports account for most intermodal traffic, “in the domestic interior of the country, everything from diapers to widgets is going intermodal,” said Mark Rourke, the chief operating officer at Schneider National Inc., SNDR +1.30% a large national carrier based in Green Bay, Wis. The company plans to add more trailers to its intermodal segment this year.

Cargo moves slower by rail than by truck, and service problems have dogged some railroads in recent months, though carriers say they expect metrics to improve as the weather warms.

Still, with big rigs and drivers in short supply, “the intermodal environment is as strong as we’ve seen it in the last four years,” said Troy Cooper, the chief operating officer at XPO Logistics Inc.