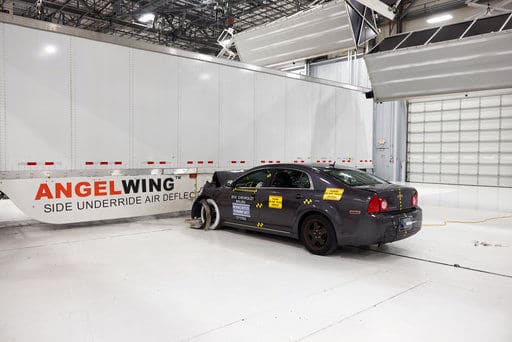 An auto safety group says that  the possibility to be involved in fatal crashes of tractor-trailers with side guard rails mounted between their tires are less likely.

But the trucking industry says technology that prevents crashes in the first place is a better use of resources.

Federal law requires big trucks to have rear underride guards, which stop cars from traveling underneath the truck in an accident. But the government doesn’t require side guards. The Insurance Institute for Highway Safety says side guards could prevent hundreds of traffic deaths per year in the U.S. alone. In 2015, 301 passenger vehicle occupants were killed when the cars they were riding in struck the side of a trailer.

The institute tested AngelWing, a steel rail covered with fiberglass that was mounted on a 53-foot trailer. The system is made by Quebec-based Airflow Deflector Inc.

When a midsize car going 35 miles per hour hit the guard rail, the front crumpled but the car’s air bags and seat belt protected the test dummy inside. In a test with no guard rails, the crash sheared off the car’s roof and the car came to rest under the trailer. The institute said that crash likely would have been fatal in real life.

“We think a mandate for side underride guards on large trucks has merit, especially as crash deaths continue to rise on our roads,” said David Zuby, the institute’s executive vice president and chief research officer.

The American Trucking Associations said the industry hasn’t come to an agreement on guard rails because they require trade-offs, including added weight. Side guard rails require stiffer trailers that can develop cracks in their frames, which presents another safety risk, ATA spokesman Sean McNally said.

McNally said the trucking industry wants to avoid crashes in the first place, and is supporting efforts to deploy safety technology like automatic emergency braking and forward collision warning systems. Electronic logging devices, which track truckers’ driving and will be required by the end of this year, will also help to prevent crashes, he said.