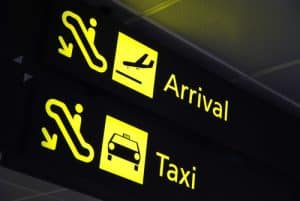 A rendering of an UberAir vehicle is shown in an image provided to CNN by Uber.

The four-person ridesharing flights will not become a reality anytime soon, but Holden said there are plans for demonstrations of the flying car network in Los Angeles, in addition to previously announced cities, Dallas and Dubai, in 2020.

The tech firm has agreements to work with other aviation companies, but this is the first time it has formally partnered with a federal U.S. agency. Uber’s partnership is part of NASA’s Space Act Agreement, a consortium of industry players working to ensure “safe and efficient operations” of its taxis and other small unmanned aerial systems flying at low altitudes.

“These are exactly the kind of partners we need to make UberAir a reality,” Holden said of NASA.

NASA did not immediately respond to a request for comment on the project.

Los Angeles will make for an interesting test bed for the flying vehicles, known for its unmanageable traffic.

Uber plans that trips from the Los Angeles airport to the Staples Center during rush hour will take less than 30 minutes — down from 1 hour 20 minutes by car. It is predicted to offer rides in the flying taxis for prices comparable to its UberX service.

The goal is to make transportation fast, and inexpensive. It hopes the service will be ready for commercial activities “several years ahead” of the 2028 Olympics in Los Angeles.