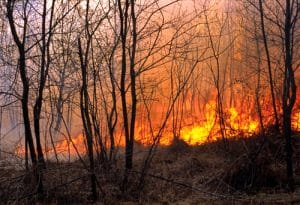 Fire crews were dealing with brush fires occurring in El Sereno and San Bernardino. Chiefs from across the southern California region were meeting in Bellflower to coordinate response to the wildfire season already underway.

“This one has started out as active as last season was,” observed Thom Porter, chief of Cal Fire’s southern region.

The chief of Los Angeles County, Daryl Osby said, “It’s going to be just as bad.”

That is a frightening thought since 2017 witnessed a devastating series of fires in and around Santa Rosa claim more than 40 lives. Only weeks later, the Thomas Fire spread from Ventura County into Santa Barbara County, burning nearly 500 square miles and becoming the largest fire in recorded California history.

Thursday’s brushers, on a pre-summer day of only moderate breezes, did not amount to much. But the concern is that, later in the season, with conditions like last year, vast regions could be vulnerable to wildfires growing explosively.

With less rain this past winter and spring than a year ago, there is less wild grass to dry out and become fuel, and that helps. Problem is, last year’s unburned grass remains.

The trend in recent decades toward larger fires has been the subject of research and debate. There is a consensus that climate change — hotter and drier conditions — plays a role.  But many believe there are other factors, including the unintended consequence of suppression itself resulting in fewer but larger fires. Regardless, with so much development in brushland areas, not providing fire protection is unthinkable.

No matter the causes, fire chiefs see the trend toward bigger fires occurring over a longer season as “the new normal.”

The chiefs urged those who live in brushland to clear the fuels, to have an emergency plan, and be ready to evacuate.

Porter said that citizens need to be prepared.

Fire agencies are also adding resources and new tools, in addition to the water-dropping Sikorsky Skycranes and Super Scoopers that come online later in summer.

“That will give us an idea where the fire is going, and what our concerns need to be,” said Armando Hogan, LAFD Deputy Chief.

The program, known as WiFire, draws on the federal Forest Service predictive system, weather monitoring networks, satellite data, and an interface developed at UC San Diego, according to research associate Jessica Block, who has been working with LA and other agencies incorporating WiFire.

Based on data parameters, it maps a fire’s projected footprint at future times. In as little as 30 seconds, the supercomputer at UCSD can churn through calculations that used to require hours, Block said.

She emphasized an experienced fire behavior analyst is still required to interpret and analyze the projections.

Nevertheless, some of the data is made public on a website, which had 8 million hits during the height of the 2017 fire season last fall.

Ways of making predictive information accessible are also under consideration, Block said. In some ways, it parallels the quake early warning development of recent years.

What To Do If Your Car Is Stuck In Blizzard