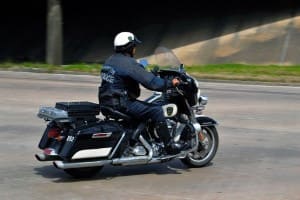 An extended high-speed police chase that started in Orange County ended in Corona.

The Newschopper4 Bravo hovered above the chase throughout. The incident started after a robbery was reported at about 10:50 p.m. in the Brea vicinity. The black vehicle zipped along on several Southern California highways.

The suspect transitioned from the 57 Freeway to the 60 Freeway and then moved on to the 71 Freeway south. The black automobile was doing beyond 100 mph. In fact, at times its speed exceeded 120 miles per hour.

Once the vehicle got near the 71 Freeway and the 91 Freeway interchange just past 11 p.m, police officers seemed to lay down a spike strip across the roadway. The strip managed to pop at least one tire on the car.

Immediately after the tire went flat, the car stopped on the highway shoulder. The driver then tossed out her car keys. After a moment she then proceeded to exit the car with her hands up. She subsequently surrendered to the police on site.

Several minutes later another suspect emerged from the passenger side of the automobile with their hands also up in the air. A third passenger appeared from the car’s backseat, sliding out and dumping themselves on the street. And finally, a fourth suspect, also a female, came from out of the backseat a couple seconds later.

Police officers approached the vehicle, surveyed the car interior where no other suspects were to be found. They took all of the people from the car into custody.