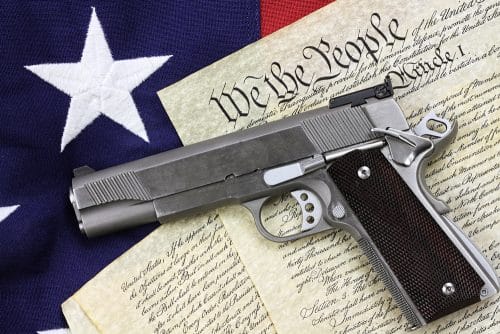 This question has been a widely talked about controversy. There is a matter of state laws and federal laws that all have to be considered. As a trucker, the job may require you to move from one state to another. The fact that every state has a different gun law calls for issues to appear.

When referring to normal drivers, who for one do not have concealed carry permits, they can carry fire arms. How else would they be able to get their weapons home from the gun store? They are only advised to place the gun in a location where in driver or the passenger cannot reach. Most likely somewhere in the trunk. All guns in the vehicle also should be unloaded and stored separately from the ammunition.

As for people who drive station wagons or trucks, you are not allowed to keep a weapon in the trunk. You must travel with the gun in plain sight. This is because you can notify an officer of the guns presence without raising alarm. You should keep the gun visible but not visible enough for the car stopped at a red light next to you could see. It is better to keep it locked in a case. You should give your permit along with your license and registration to the reporting officer.

With a concealed weapon permit you are (in most cases) allowed to carry a gun on you or near you. It is IMPORTANT to know your state laws very well. Make yourself aware of the gun laws in your state and the states you may be crossing. It may be legal in your state but other states might have other laws that don’t reflect on your states laws.

The Department of Transportation has made themselves clear that any concealed weapon law is based on the state.

Here is some information about state gun laws:

States that issue guns to only their residents:

States that issue gun permits to both residents and non residents

States that may issue to residents only

States that may issue to residents and non-residents

States that deny the right to carry

The Worst States For Truck Parking

What Truck Drivers Have To Know About DAC Reports?