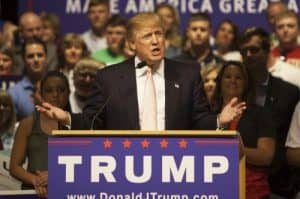 According to the American Society of Civil Engineers, poor roads will cost business $1.1 trillion by 2040. The entire economy is estimated to be impacted by $3 trillion.

Bumpy and congested roads cost truckers greatly.  These inadequate road conditions increase $49.6 billion in costs to the trucking industry. Another $100 billion is lost because traffic.

According to industry representatives, investing in new roads and repairs will be a great benefit. This is because of the fact that trucks move 56% of the country’s GDP and roughly one of every 16 jobs can be found in trucking. Not to mention, the billions of dollars spent to repair pothole damage and other effects of bumpy roads..

America’s infrastructure received a grade of D+ in the ASCE’s 2013 report card. Roads (D) and bridges (C+) both received poor grades, and the ASCE estimates that 42% of major urban highways remain congested.

Trump. when addressing Congress recently, stated that he will ask lawmakers to pass a bill that budgets $1 trillion into infrastructure projects over a 10-year span. The plan would be financed through public and private funds, according to Trump.